German politicians are both more and less religious than British ones 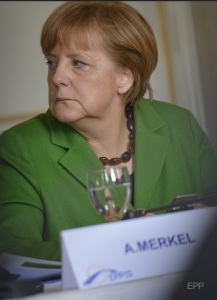 ANGELA MERKEL, who grew up in communist East Germany as the daughter of a Lutheran pastor, is a „serious Christian“ whose faith is mostly kept „thoroughly private“, although every so often she can surprise people with public statements about her personal creed. (For example, she said in an interview in 2012 that „we Christians should not be afraid of standing up for our beliefs.“) That, broadly, is the thrust of an essay about the German chancellor’s religious life which has just been published by the British think-tank Theos as part of a series on political leaders and faith.

Nothing too surprising about that conclusion, but the essay opens teasingly by asking whether Mrs Merkel’s religious life can usefully be compared to two British prime ministers who said they were strongly guided by Christian belief, Tony Blair and Margaret Thatcher. Her political profile, at least, has points in common with both Britons. Like Lady Thatcher, Mrs Merkel is a woman with scientific training who rose to the top of a centre-right party despite a background that was neither privileged nor well-connected. Like Mr Blair, she guided her party towards the political centre, studying the public mood closely and borrowing policies from her opponents.

But the leaders‘ religious styles have certainly been different. Lady Thatcher, raised in an ethos of industrious Methodism, saw religion as as inspiration to work and self-improvement; the Biblical Good Samaritan, she pointed out, was only able to help his stricken neighbour because he had a bit of money. Mr Blair (who converted to his wife’s Catholic allegiance after leaving office, while remaining liberal on touchstone ethical issues) had to be kept in check by his prime ministerial minders whenever his zealous but idiosyncratic faith came to the surface. Religion seemed to make him more sure of himself, not more humble. Their successor, David Cameron, was meeting Mrs Merkel today: he has played to the patriotic gallery by stressing Britain’s cultural inheritance as a Christian country, while acknowledging that his own faith comes and goes, like the reception of an erratic radio signal. So the chances are that they didn’t pray together.

Mrs Merkel’s periodic professions of faith, as the essay notes, have been trenchant enough and yet carefully non-confrontational. Although she heads a Christian Democratic party, she has generally avoided suggesting that Christianity has specific political consequences, and hence avoided implying that people with different political views are less good in the sight of God, or less good in any sense. In that 2012 interview, she called herself „a member of the evangelical church“ who „believe[d] in God“ and for whom faith was a „constant companion“. But her most frequently quoted religious pronouncement was a statement to her party faithful that „we don’t have too much Islam, we have too little Christianity, we have too few discussions about the Christian view of mankind.“

In handling the past year’s vast influx of mostly-Muslim migrants, she has taken a political risk by stressing the Christian duty of generosity rather than Christian nativism. In open contradiction with some of her centre-right colleagues, Mrs Merkel has insisted that Islam can find a place in Germany, but only on the basis of respect for the country’s laws and constitution.

And within the Christian family, her message is also carefully emollient. She urged her fellow Protestants not to celebrate the 500th anniversary of Martin Luther’s revolt against Catholic authority in a way that sharpened sectarian differences. „We should always stress what is common in the Christian religion,“ she declared.

As for Anglo-German comparisons, the more interesting question is not how various devout politicians line up but about the changing political/religious culture of the two countries. As a colleague writes in this week’s print edition, Britain has become much more secular since the eras of Lady Thatcher or Mr Blair, while still containing pockets of religious zeal, some of which are expanding. Even careful religious statements like those of Mrs Merkel would go down badly with most British voters, and Thatcher-style lectures on the Good Samaritan would be even more discordant; but Mr Cameron still found it worthwhile, during his election campaign, to address a meeting of Nigerian Pentecostalists and swap Bible stories.

Mrs Merkel grew up in an environment where religion was repressed, and words had to be measured carefully. Her country’s broader political ethos is still shaped by a post-war aversion to any fanatically professed ideology, combined with a sense that religion of the right sort can be an antidote to secular creeds like Nazism or communism. But to play that role, religion has to avoid picking fights, while also standing its ground. That is the equilibrium that Mrs Merkel is trying to maintain. There is only British figure of whom the same could be said, and that is the head of the Church of England, Queen Elizabeth.